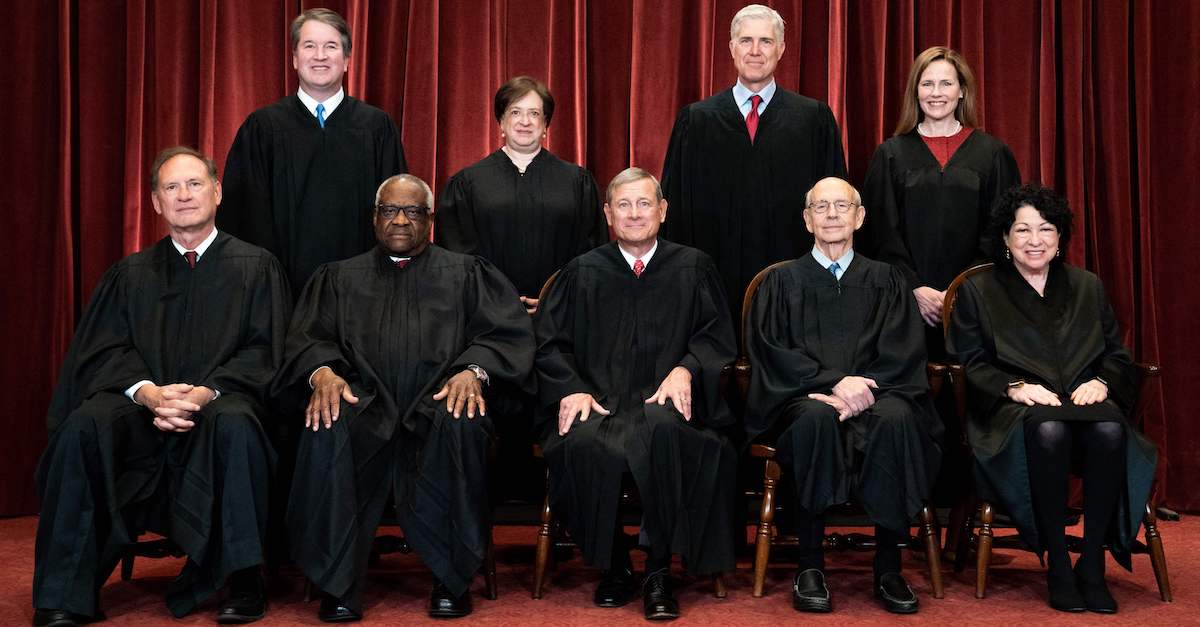 This is a quick and simple post explaining what the Supreme Court ruling against the OSHA vaccine mandate means. It is surprising that this has to be explained but nonetheless, here it is.

The Supreme Court ruled against OSHA (Occupational Safety and Hazard Administration) from enforcing requirements on businesses with 100 or more employees for them to have the COVID vaccine and to show proof of it to work in the workplace. It also effectively stopped the ludicrous fines for the OSHA mandate because the rules that were proposed by OSHA (vaccine and testing requirements) were struck down by the Supreme Court.

The main reason that was given for why the Supreme Court struck down this mandate was because OSHA doesn’t have the authority to make such requirements of businesses. This is because federal agencies only have the authority that Congress (House and Senate) has granted them by statute. Federal agencies cannot grant themselves additional power by making up rules based on their own whims. OSHA was trying to use a power that they didn’t have to enforce something that they didn’t have the legal authority to enforce because Congress never gave them that express authority through legislation.

Another reason that this was struck down was because they were trying to take an action that they were not authorized to do by Congress under the premise that “it was an emergency” and that they needed to take that action. Funny that they say that it was an emergency and yet they decided to delay the deadline earlier in January. If it was such an emergency, would you delay it that far back? It just goes to show you that all of it was based in posturing and it was about the Biden Administration trying to bully the rest of the country into compliance which is what this whole circus has been about from the very beginning. Anyways, I digress.

An additional reason as to why OSHA were overstepping their boundaries was because they have nothing to do with vaccines. OSHA is specifically set up with the authority to protect employees against “toxic materials or harmful physical agents” and this is through personal protective equipment (PPE) such as gloves, goggles, and masks. This makes sense because there are plenty of workplaces which deal with harmful substances and it could create a disaster if people were to have skin contact with them so it is needed in those specific workplaces for the people dealing with those harmful substances to have such protective equipment. The thing is that the Biden Administration was trying to rationalize using OSHA to enforce the mandate by claiming that COVID-19 was toxic or a harmful physical agent to the workplace. The thing about that is that this was a ridiculous stretch because poison and the virus are two entirely different things. COVID is not a toxic material or a harmful physical agent. Toxic materials and harmful physical agents generally refer to chemical substances, biological agents and physical stresses such as noise, heat, and radiation. Nowhere in the OSH Act is it expressed that COVID-19 (SARS-CoV-2) as “toxic” or a “harmful physical agent”. Not only that, a provision (29 U.S.C. § 675) in the OSH Act requires the government to prepare a report “listing all toxic substances that are in industrial usage“. With that provision, it is clear that it is talking about toxic substances like chemicals and not viruses which goes to show you how asinine this whole attempt by OSHA was. Furthermore, another provision (29 U.S.C. § 669) in the OSH Act imposes duties and powers regarding “substances” and “agents” to which employees are exposed as part of their employment. This is a provision focused on dangers which occur at work because of one’s work. This is not a provision that is focused on dangers that are generally occurring in society. Plus, there is no precedent for OSHA doing this for any other viruses which were rather dangers occurring in society and not because of the workplace. OSHA never attempted to do this for any other virus or disease. Another provision (29 U.S.C. § 671a) requires studies regarding “the contamination of workers’ homes with hazardous chemicals and substances, including infectious agents, transported from the workplaces of such workers.” Again, this is mainly in regards to chemicals and substances because of the conditions of the workplace. The conditions of the workplace require the workers to handle these chemicals and substances. Even if you wanted to stretch this as being about the virus, this isn’t the case for remote businesses because they are all remote and are not dealing with the virus. OSHA is designed to address workplace hazards and not pandemics or endemics. OSHA is designed to require employees to wear safety equipment and not vaccines. Vaccines are not safety equipment.

Simply put, OSHA’s attempt to mandate vaccines was like trying to fit a square in a peg hole. They simply don’t have the authority to do something like that. As a matter of fact, no federal agency has the authority to make such a mandate. The FDA is authorized by Congress through the Food, Drug, and Cosmetic Act to decide whether or not a vaccine is safe for its intended use. The CDC is authorized by Congress through the Public Health Service Act to quarantine infected parties to prevent an epidemic from occurring or curb the spread. Neither the FDA nor the CDC or any federal agency are legally authorized by Congress to make such sweeping mandates requiring vaccines. It all comes down to the fact that there must be legislation where Congress gives an agency that power to make such a requirement and that has never been made.

We could go a little further as to explain why the OSHA mandate was wrong but this post is not meant to be long-winded or exhaustive in detail. The point of this is to show you that the Supreme Court ruling for this case is specifically talking about OSHA not being able to mandate vaccines from the federal level for the workplace across all 50 states. This doesn’t mean that businesses can’t still mandate the vaccine on their own; including hospitals. Keep in mind that the Supreme Court ruled in favor of health care workers being required to take the vaccine. This perceived victory or upholding of justice for the OSHA case that some are saying is quite silly. The fact is that the Supreme Court is not only a compromised institution but it is an illegitimate institution and its existence rather impedes on the Constitution as well. This will be discussed in greater detail in a post that is coming up soon about the Supreme Court and the Constitution itself.

Nonetheless, to drive the point home, this ruling by the Supreme Court does not mean that your business can’t mandate you to take the shot or that cities or states themselves can’t mandate workplace vaccine requirements because that isn’t what the case is about. Cities or states making those requirements generally depend on the states themselves and how the courts in those states rule because it is a state-by-state issue, and each state is different in how they govern and rule. So the idea that this rule ended all mandates as some are surprisingly thinking is completely wrong. *This ruling by the Supreme Court simply means that OSHA cannot mandate businesses in the United States with 100 or more employees to require their employees to have the shot or to undergo testing because they do not have the authority to do so. The only way that a federal vaccine requirement of businesses with 100 or more employees in America can take place is if Congress were to pass a law giving the federal government that specific power. However, Congress is split on that and with the midterm elections coming up in November this year and the Republican Party most likely taking over Congress, that is unlikely to happen. Therefore, with that understanding, the Biden administration is not going to be able to mandate the vaccine for private businesses from the federal level but they can still pressure big companies to have this requirement in the workplace which is another issue. However, this does not mean that your employer cannot mandate you to get the shot because it is a state-by-state issue. Businesses can still require you to get the shot unless you live in Tennessee or Montana because those two states banned private businesses from requiring their employees to get the shot.

Simply put, if your business is requiring you to get the shot, you can file for a medical exemption if you have a legitimate medical reason and it is expressed in the form of a doctor’s note or you can file for a religious exemption which is the more likely exemption that you would choose or you could quit and find a job where they don’t require it. As for cities and states making these vaccine requirements, they have to be fought in the courts within those cities and states because it is a city (municipal) or state issue.

With that being said, hopefully this clears the confusion and sets things straight. It is important to not be misled about what these rulings are about because then you think like some people were thinking in that the vaccine mandates are no longer enforceable which is not true. It is important to be informed about this because for those of us living in America, this issue affects the vast majority of us. Even if you are in a red state, your business can still require you to get the shot unless you live in Tennessee, Montana or Texas to a certain extent which have a private employer vaccine ban in place which means that those states have banned private businesses from mandating the shot for their employees. As for state workers and students who attend public schools, only Texas, Michigan, Utah, Montana, Indiana, Arkansas, Tennessee and Georgia have banned vaccine mandates for state workers and schools. Every other state either has those mandates in place already like Washington, Virginia or New York or they have not taken the action to ban those mandates for whatever reason; most likely because they have a split Congress. It is a different situation for everybody depending on where you work and what state or city you are in.

All that said, this was a post to simply inform those who either needed clarification or needed to know what the Supreme Court ruling actually was about. Whatever you do, stand strong in faith and don’t let what is occurring now make you stumble because for those of us who love the Most High, there are going to be far greater battles down the road in this spiritual warfare that we are going to have to fight. Stay strong and keep fighting the good fight of faith as 1 Timothy 6:12 says.